A secret in the soil you need to know about Moab

Planning a visit to Moab, the adventure-sport capital of the world? Here's one unique thing you need to know about Moab: Because this canyon country mecca sits on the Colorado Plateau, Moab is home to an organism that is virtually everywhere - literally in pretty much every square foot of the backcountry. Yet it's probably something you have never heard of: biological soil crust.

This weird and very important crusty stuff goes by various names: cryptobiotic, cryptogamic, microbiotic, or microphytic -- but whatever name you use to describe it, it's basically soil. Because the area around Moab is almost entirely composed of sandstone of one type or another, as that stone erodes it creates.... you guessed it... sand. Lots, and lots of sand.

And yet Moab is not a sea of wind-swept sand dunes, à la the Sahara Desert. Most of the sand around Moab, and throughout the wild canyonlands that surround it, are covered in a forest of pinyon pine, juniper, sage, blackbrush, yucca, rice grass and a hundred other species of desert vegetation collectively called the Pinyon-Juniper Forest. In fact, in certain places and at certain times of the year, it can look positively green and lush. 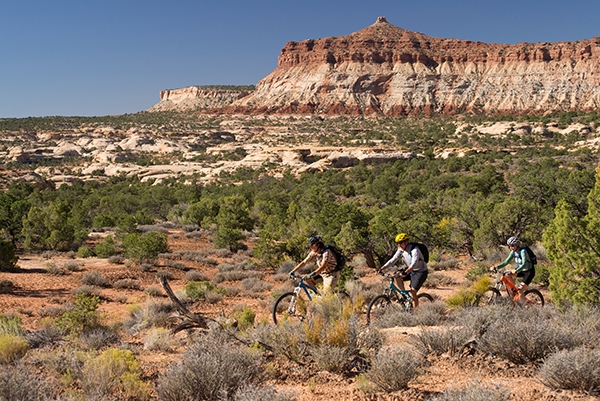 So what accounts for all this growth, when by all rights, the soil should be just a bunch of sand? You guessed it again... biological crust.

Microscopic in size, this synergistic community of fungi, lichens, cyanobacteria, bryophytes, and algae turn blow sand into viable soil capable of supporting a rich diversity of plant life (which in turn supports a wide variety of wildlife.) The trick is, in this ultra-dry environment (average rainfall below 10 inches/year and average humidity around 20%) biological crust develops very slowly. 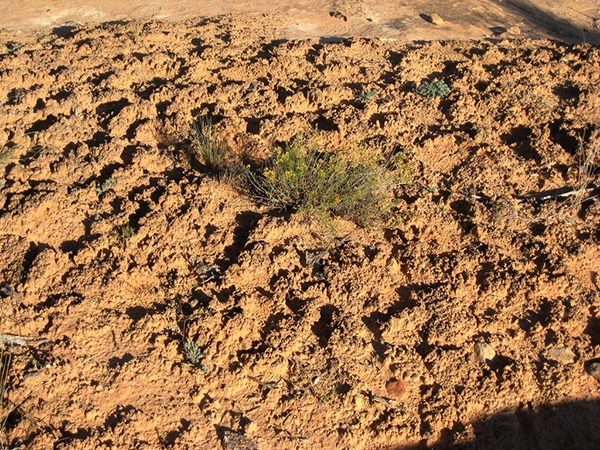 Left undisturbed for 50 years, the sand becomes a deep bed of small inch-tall protrusions, like black fingers poking up from the earth, almost mossy in appearance and stiff to the touch. This surface drinks in the slightest moisture and stores it for the plants that desperately need it. It also -- critically -- holds the sand in place when the wind blows. And, perhaps most important of all, these practically invisible microscopic organisms deposit nitrogen in the sand, turning a desert into a lush "forest."

But, if it is disturbed -- by, say, a single tennis shoe-print or tire track -- it is crushed, and turns instantly back into blow sand. With Moab now attracting well over a million visitors each year, you can imagine what could happen if everyone were to start hiking and biking willy-nilly up every nook and cranny. Our magical canyon country would soon turn into a denuded, dusty wasteland.

So, as you are planning your vacation to Moab, be sure to keep in mind the importance of sticking to the trail. As the locals say -- Don't Bust The Crust. The pinyon-juniper forest, and all the creatures that live in it, are counting on you.

Translate »
If you are coming to Moab and plan to visit Arches National Park, here is some important information you should check out:
Arches will need a Timed Entry Ticket to access the park between April 1 through October 31, 2023.
Tickets for April 2023 will go live on Recreation.gov beginning at: 8 am MST on January 10, 2023.
The park will release tickets three months in advance in monthly blocks.
Reservations will be required from 7 am to 4 pm daily and will cost $2 per reservation.
For those without an early reservation, some next-day tickets will be available at 6 pm daily.