All The “Skinny” on Moab — for Skinny Tire Folks 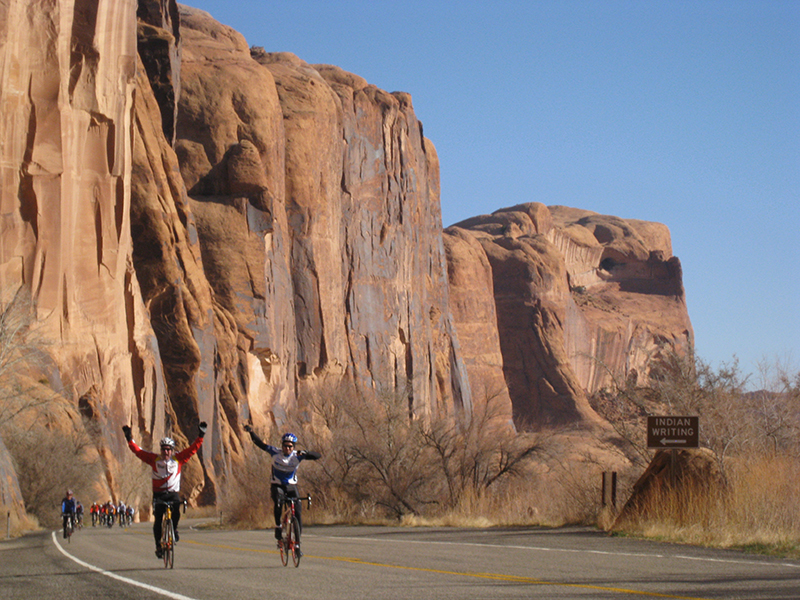 Moab is an amazing destination for road cyclists. Though better known for mountain biking, whitewater, and a diverse menu of power sports, road cycling in Moab has become increasingly popular. With relatively low-traffic paved roads along rivers and creeks, across the shoulders of small “island” mountain ranges, down spectacular canyons and across awe-inspiring mesa tops, Moab has gained a reputation as a skinny tire destination to compliment it’s renown in the fat tire world.

The seeds of Moab’s love affair with road cycling were planted in 2001 with the creation of The Skinny Tire Festival, an annual early-spring weekend of road cycling tours organized by founder Mark Griffith. The festival has grown over its 17-years, quadrupling in size, and sprouting two other annual road cycling events — Moonshadows in Moab, a summer evening ride over the mountains, and Moab Century Tour, a fall weekend festival. The festivals, especially the spring event, are known for their family-like feeling, with many participants having returned many times over the years. In fact, some have returned each year since its founding. 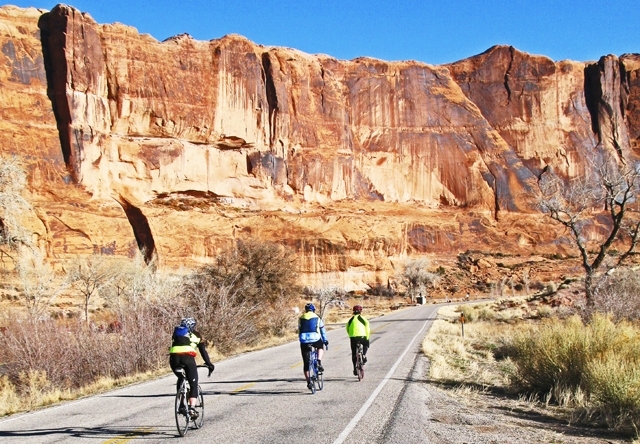 Perhaps sparked by these three annual events, the road cycling crowd has definitely “discovered” Moab, with more and more visitors coming to Moab throughout the year specifically to ride their skinny tire machines. Griffith says, “It’s not uncommon to see 30% of the visitors in town during the fall” with road cycles on their cars.

Scott Newton, owner of Moab’s Poison Spider Bicycle Shop, has also promoted road cycling in Moab via their annual Grand Fondo race in the fall and in many other respects. Newton says he used to never see other road cyclists when he’d ride the La Sal Mountain Loop, but that has changed dramatically. “I’m always shocked when I do the Loop Road,” he says. “Very rarely do I not see a road cyclist, anymore. Before, it was very rare to ever see one.”

If you, too, would like to discover road cycle Moab, here are a few tips to consider in planning a visit to Skinny Tire Moab:

One of the best online resources for road cycling route maps in the Moab area is this PDF produced by Poison Spider Bicycles and hosted on the Discovermoab.com website. Physical copies may be picked up at the Poison Spider shop. The Route Guide details nine different rides that vary in length between 33.4 miles and 79 miles and that range from flat riverside rolls to extremely difficult rides with 4,000 climbs up and over the shoulder of the mountains. These rides are listed below in order of shortest to longest. The Poison Spider Route Guide has complete descriptions, including route maps, suggestions for varying ride length and points of interest along the way.

Being such a mountain-bike hot spot, Moab has an abundance of bike shops in town. Most focus primarily on fat tire machines, but several also have resources for the skinny tire crowd.