Moab is known around the world as a mountain biking mecca, and much of that fame is due to The Slickrock Trail. "Slickrock" is arguably one of the most famous mountain bike trails in the world, with thousands of riders flocking each year to its steep and relatively smooth, rounded rollercoasters of sandstone fins and amazing views. In fact, for some, this famous trail is their personal mtb shangri la (though, honestly, over the past 15 years, Moab has developed a ton of intermediate and advanced mtb trails, with as just much slickrock surface, and which are far more rideable and fun.)

And yet, despite its legendary status, or because of it, many readers may not know that long before it was discovered by mountain bikers, The Slickrock Trail had already been busy "putting Moab on the map" in a number of other sports, including skateboarding.

The trail was originally created for motorcycles - specifically, the then new breed of ultra lightweight Honda 90 trial bikes. The first mention of the Slickrock Trail in Moab's local weekly newspaper of record, The Moab Times-Independent, is a March 27, 1969 article titled "Proposed New Slickrock Trail Would Provide Thrills for Trail Bikers," by Dick Wilson. "The Slickrock Trail is a proposed route for trail-adapted motorcycles which provide access to a pure, unspoiled wilderness seldom visited presently, and even though it is within two to four miles from Moab, many of it's features are not well known." At this date, Moab was still in the throes of its uranium boom, and tourism was only a minor side note.

The article continues, "The previous week BLM managers, Tex McClatchey, writer Dick Wilson 'mounted on trail bikes to demonstrate the cycling potential of the slickrock' and hiked over the major portion of the route." The next day, there was another demo and hike that included the chairman of the Grand County Safety Council and Jerry Christian, "a trail-bike enthusiast from Greeley, CO." 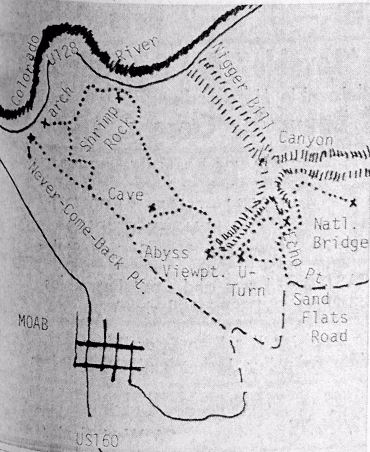 "The slickrock Trail has been laid out tentatively on knobs of bald Navajo sandstone whose undulating slopes and rounded surfaces provide a great deal of sport to riders of light bikes." Again, they were referring to Hondas. And at this point, it wasn't even certain whether the Slickrock Trail would become a reality. This article was essentially a pitch.

"If the BLM decides to establish the Slickrock Trail, it will provide visitors the opportunity of seeing a unique slice of terrain peculiar only to Southeastern Utah. The trail which would be marked in some way, would be on rolling red rocks situated within sight of Arches National Monument, the Colorado River and the La Sal Mountains and many other geological wonders."

In the same issue, a sidebar article detailed safety recommendations by the county that includes strongly recommend "solo" riding (one person to a machine), discouraging people making the trip alone, discouraging contests, and riding close to the edge of cliffs. 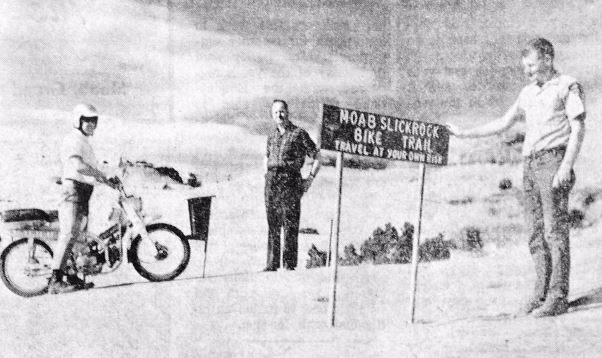 The June 5 issue carried an article announcing "Slickrock Bike Trail Completed on Hills Northeast of Moab" and stating that "five cyclists from Hill Air Force Base rode a portion of the trail over Memorial Day weekend" one of whom was noted as "a race enthusiast" who was seventh in overall Utah competition and whose specialties "are in hill climbing and desert scrambling."

The trail was repainted at the end of the season the following year. In 1971, The "C" It By Cycle Rentals "established it's headquarters and trail bike rental service at Tex's Tour Center north of the river bridge." Apparently, "there have been many requests about bike rentals in the past, especially with national publicity occurring about the Moab Slickrock Bike Trail. One person last year, for example, flew to Moab for a ride on the bike trail but could find no bikes for rent." (Note: again, they were talking about motorcycles.)

An article on May 26, 1975 reported on the first fatality on The Slickrock Trail. At 10:30 am two motorcyclists from Salt Lake City and Provo were riding the trial when one stopped near the edge of a cliff. "He saw that his companion was accelerating and tried to wave to him to stop, however the Feriante youth did not understand Hansen's signal and continued to speed forward. By the time he saw the drop, he was unable to stop and fell 600 feet to his death." "A person fishing on the river below, heard the motorcycles and looked up as the incident occurred. 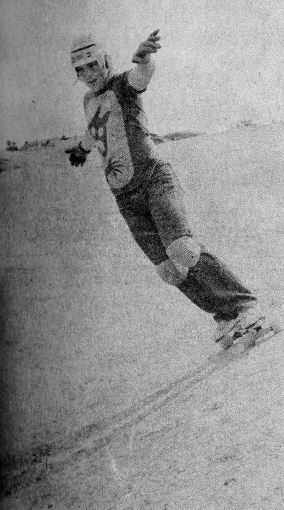 An article in 1978 notes that "Moab has already become a haven for backpacking, fishing, 4-wheeling, motorcycling, and rafting" (note the absence of any mention of cycling) and proclaims the next sport to find Moab "may well be skateboarding." A group of local skateboarders (David Urbanek, Joe Arnold, Ricky Berry and Charlie Gonzales) had started riding The Slickrock Trail a few years before, and were featured in "The Wide World of Skateboarding."  Afterward, the paper mentions that "skaters started calling," especially from neighboring Grand Junction, CO.

It would be years before mountain bikers began riding Slickrock Trail, or Moab gained its first mountain bike store, Rim Cyclery, which opened in 1983. This was the year after Moab's uranium processing plant closed, signally the end of an era and the beginning of a new one.

Soon after, Moab started making the news as the Mountain Bike Capital of the World, largely due to media coverage as The Slickrock Trail was adopted by its third principal sport, mountain biking.