Moab mountain biking season wraps up pretty quick at the end of October, leaving guides on what has been called ‘Funemployment.’ Plenty of time to ride and good November weather make it a great time of year. I thought, let’s celebrate the end of the riding season with a good adventure ride! 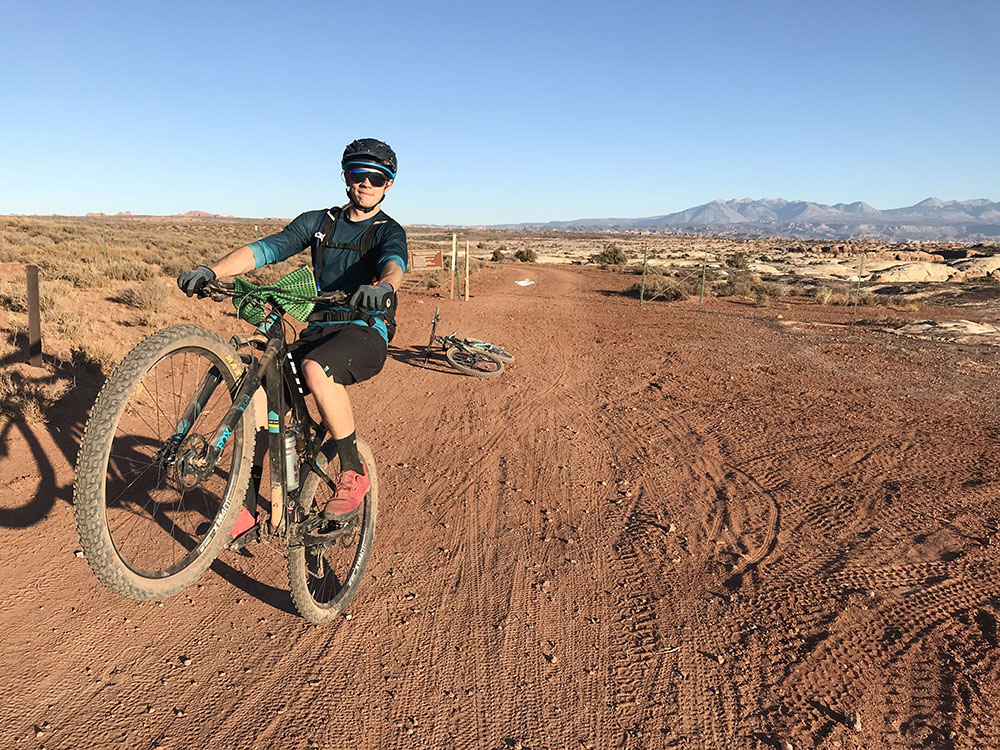 I’ve had the great pleasure of attending a few “Big Rides” most notably, SSAZ, or Single Speed Arizona. At these events there is usually a barely marked course, bad directions, about 40 miles to cover, some snacks and the expectation that you “make it a party,” at least a little. I hatched a plan for Moab’s own version of this epic ride.

There are so many awesome big Moab routes for this kind of ride. White Rim (in-a-day) or Lockhart Basin are common big rides, but all doubletrack. To connect big singletracks in Moab, you have to go north of town to avoid long road pedals. One awesome ride is Mag 7- Portal via Navajo Rocks and Chisolm, but this ends up being more like 65 miles – a little too big. Another new classic route is connecting North Klondike to town, via Sovereign, Klonzo, Arches NP, and the Moab Brands trails paralleling the east side of Hwy 191 south into Moab.

We settled on this last option, the “Super Klondike,” and set a date for mid-November. Shuttle vans were booked, a Facebook event created, and a few volunteers recruited. On at least one occasion, my personal bike adventures have led to calls for help, so I asked a friend to be our “Emergency Contact.” Another friend who couldn’t ride offered to set up an aid station near the half-way point. 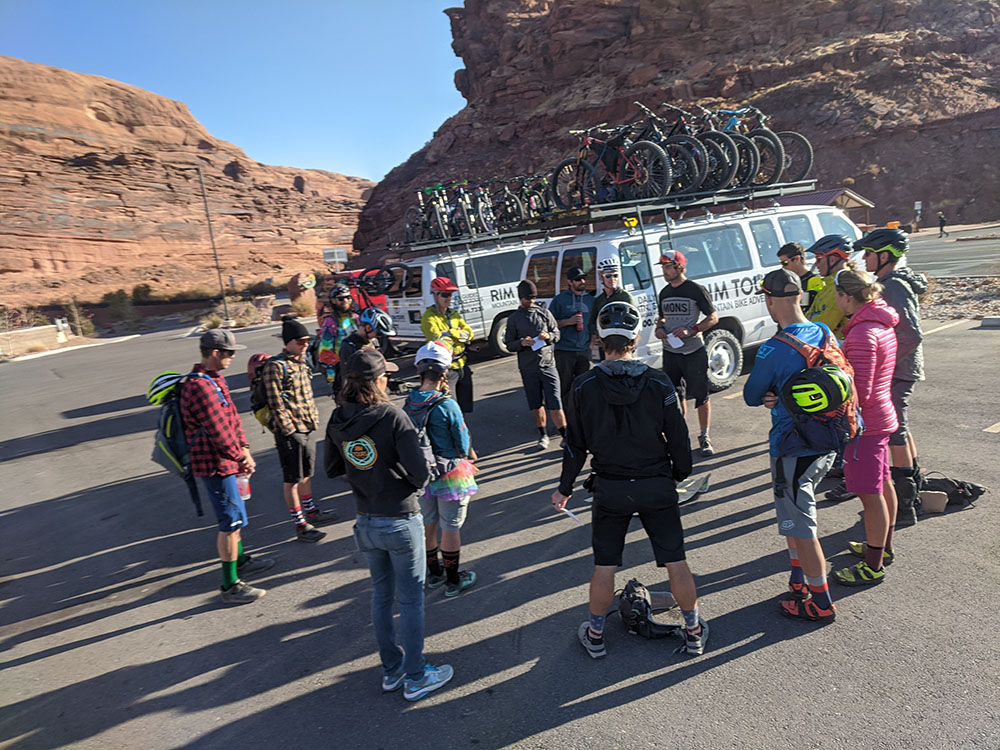 Initial response was enthusiastic, but as the date neared, the reality of 40+ miles of Moab rocks sunk in and there was a rush of last minute bail-outs. Still, on the morning of our ride, we had 16 riders show up stoked to get in some good miles! We shuttled up to North Klondike, and started out towards “Alaska” which was a punch-in-the-gut climb for me on my singlespeed. Once on top of Klondike Bluffs the riding is undulating but flowy, and takes about 10 miles to cross. Turns out, I was the one to need emergency help, when I snapped off a pedal. Luckily, one of the shuttle drivers wasn’t too far gone, and I hobbled to the south end of Klondike and grabbed a new set of pedals. There were a couple other mechanicals (break downs) but eventually the back group caught up and we headed towards south towards Sovereign. 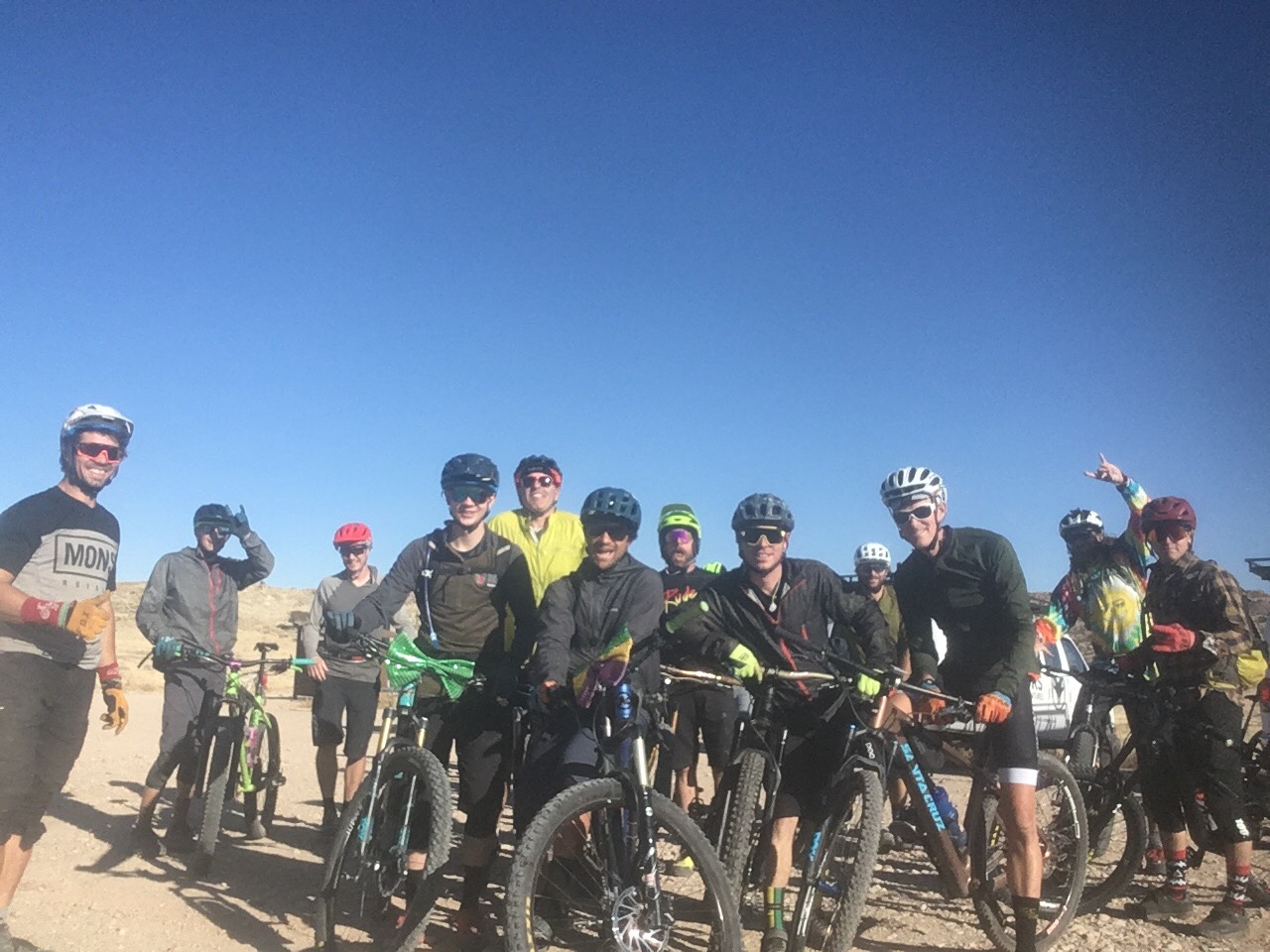 The Sovereign Trails were some of the first singletracks in Moab, but these days are mostly the domain of dirt bikes. Starting from Klondike Bluffs Road, the Sovereign singletrack connects to Cedar Mountain trail – a very rocky geologic zone higher up in the sedimentary stack than Moab’s famous red rocks. 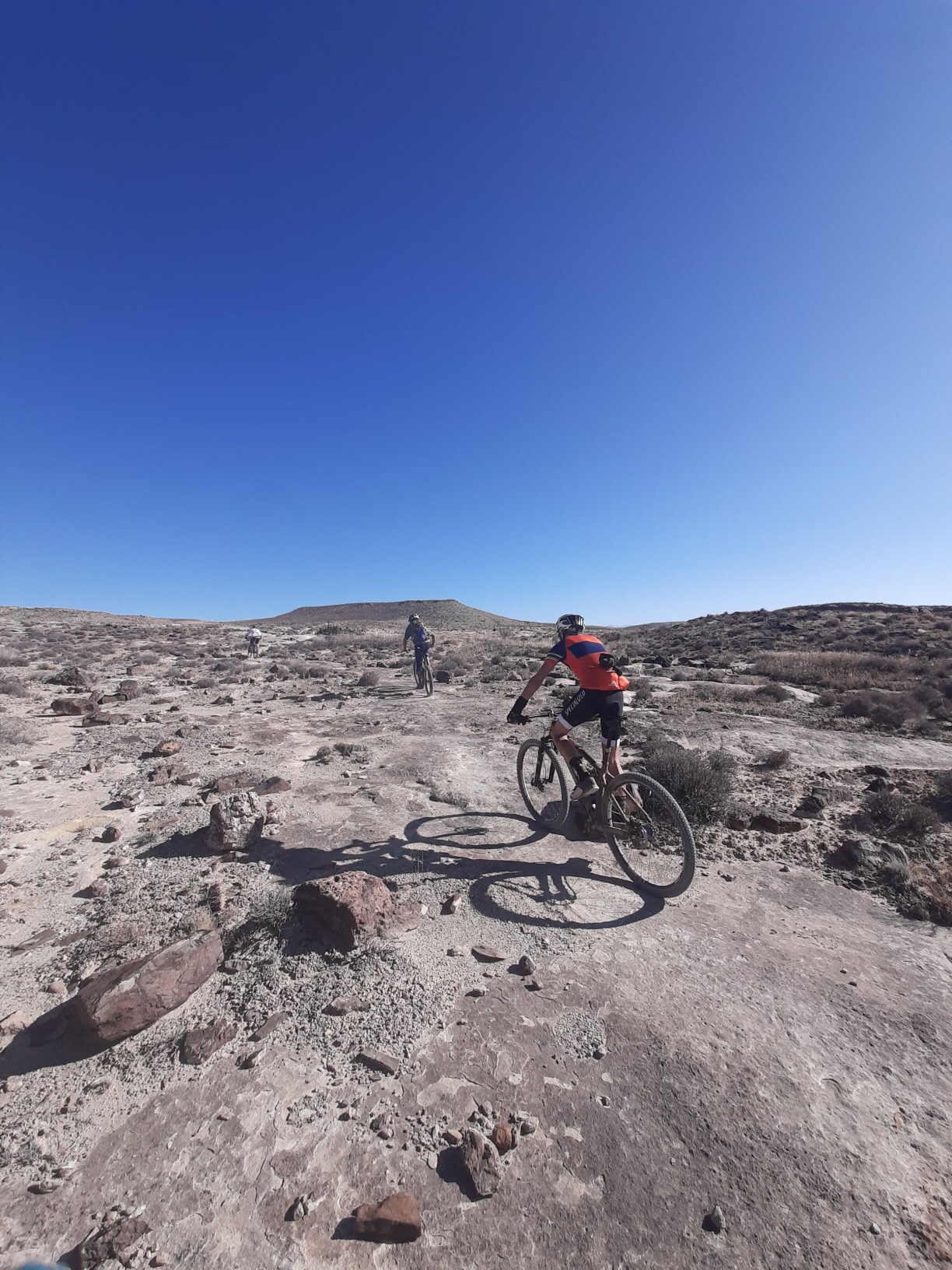 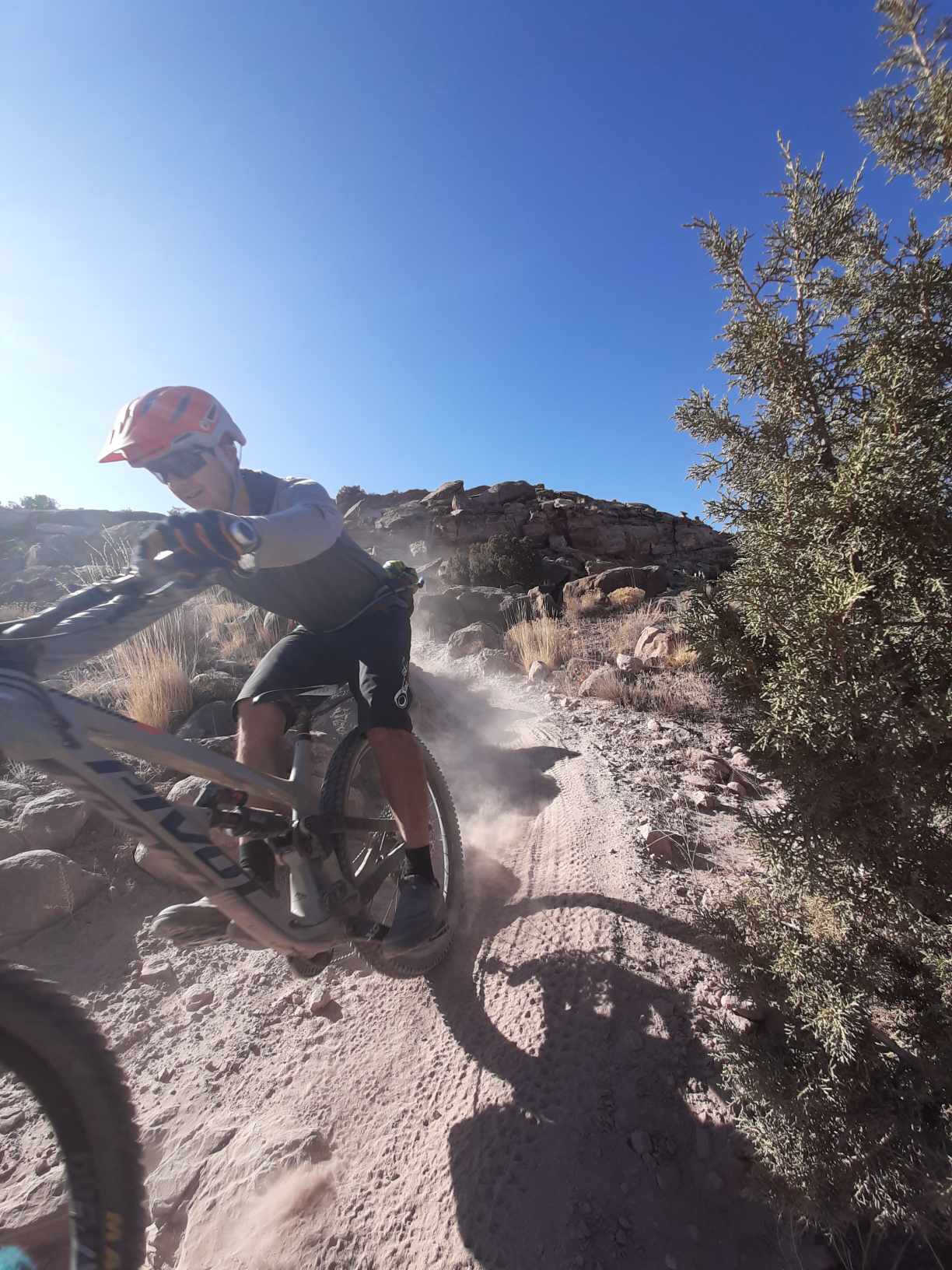 At this point, I was with the back group, and suggested we take a shortcut to the aid station. Miraculously, the two groups of riders converged on the aid station at the same time from two different trail sections! We had some awesome fresh pancake PB&J’s as well as a complement of salty snacks, and topped off our water for the home stretch. 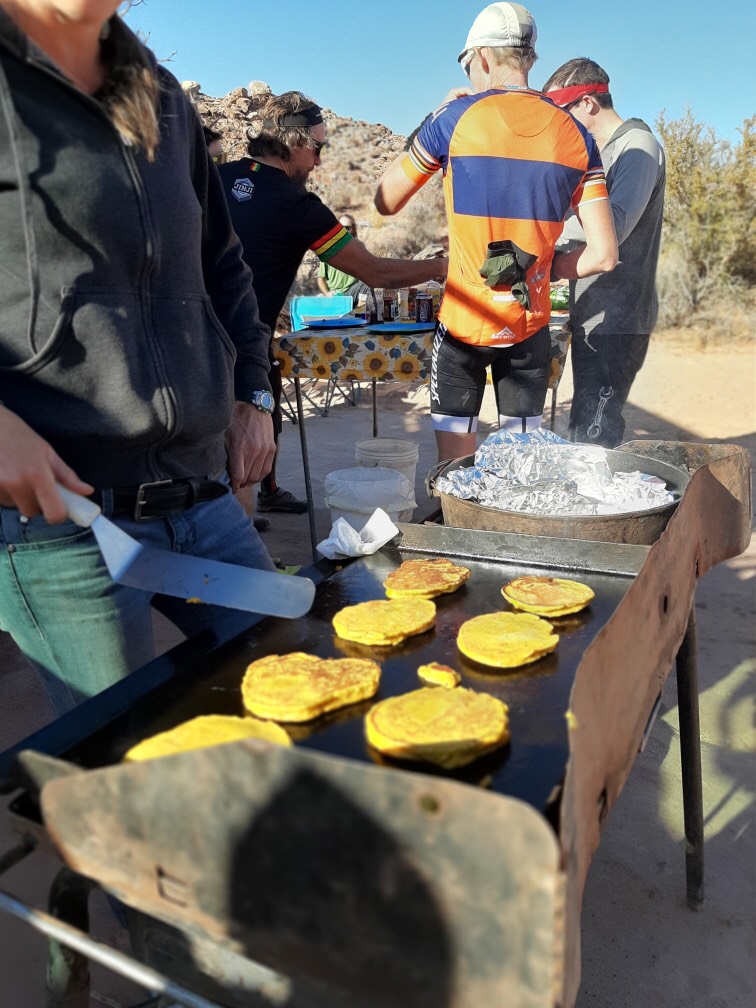 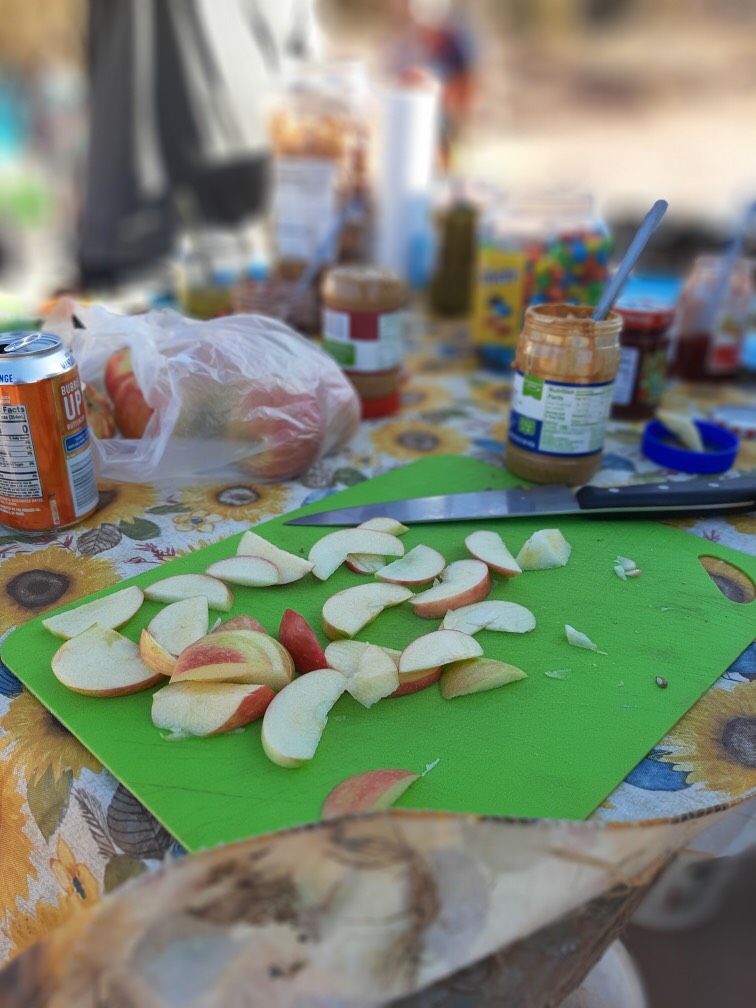 As we head out again around 2:30 PM, it was clear that we were going to be tight on daylight, but we climbed on towards the top of the Klonzo trails and enjoyed one of the more fun descents on “Borderline.” We rode “Zephyr” which grazes a corner of Arches National Park and connects to the north end of the Moab Brands trails. Arriving at the top of the Seven Mile Canyon pour-off, the sun dipped behind the towering cliffs and we turned south as dusk descended.

By this point we were mostly wrecked, and just trying to make it back to town before dark. Groups made their way through the Moab Brands trails, and finished with fun descending on “Sidewinder” before coasting the bike path back down to the river. We arrived about 30 minutes before full dark and toasted each other with some chips and guac to a successful “Big Ride.”

A ride this big is a great way for local mountain bike guides to celebrate the winding down of Moab’s main tourism season. (Admittedly, however, during the past ten years, it has become more routine to see visitors, and bikers, arriving in Moab throughout the month of November, and some, even into December.) In any case, whatever time of year you visit Moab, if you are up for a long day in the saddle, Moab’s famous system of singletracks can be creatively linked together to form several awesome and challenging “big rides.”